ETFGI reports assets invested in ETFs and ETPs listed globally reached a record of US$5.25 trillion at the end of September 2018 …

The trend towards products providing exposure to the US continued, with equity based products tracking the core US indices seeing substantial inflows, according to ETFGI’s September 2018 Global ETF and ETP industry landscape insights report.

“Developed markets were broadly up during September following positive economic data from the US, Japan and Eurozone, despite the US-China trade dispute and on-going political tension in Europe. Developed Markets ex-US gained 0.68% during the month while the S&P 500’s winning streak tapered off, gaining only 0.57%, with mid to small cap US equities closing down. Developing markets downward trend continued, with EM markets down 1.37% and Frontier markets down 0.18%, bringing year to date declines to 8.08% and 7.56%, respectively.” according to Deborah Fuhr, managing partner and a founder of ETFGI. 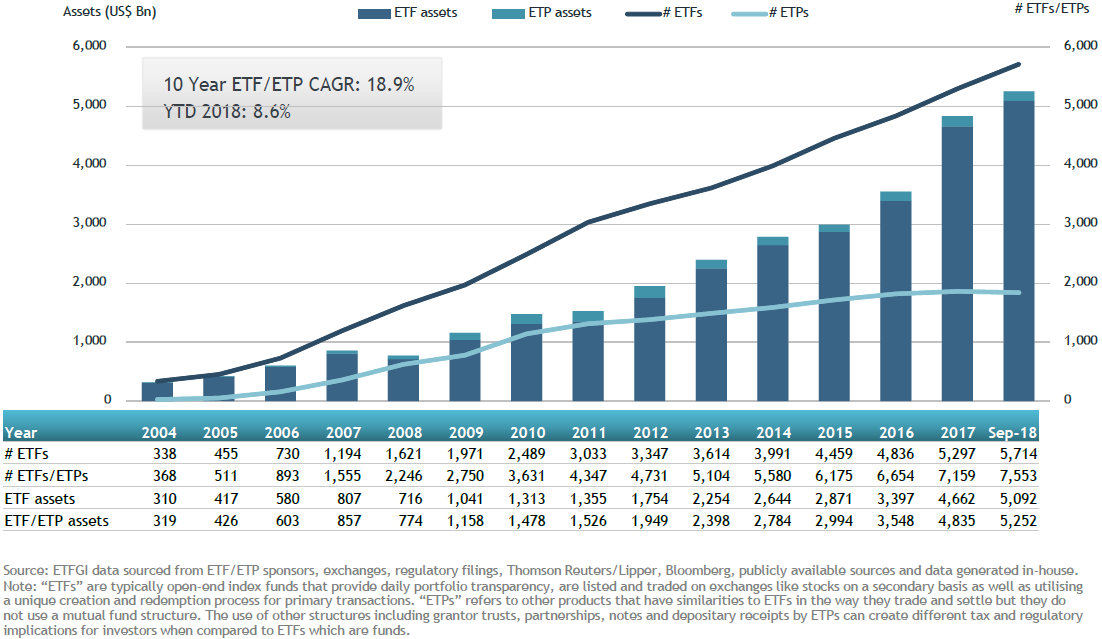 Fixed Income ETFs and ETPs listed globally gathered net inflows of $7.24 Bn in September,  growing net inflows for 2018 to $74.10 Bn, considerably less than the $121.83 Bn in net inflows at this point last year.

September marked the 56th consecutive month of net inflows into ETFs/ETPs listed globally, Year-to-date in 2018 there have been net inflows of $351 Bn, less than the $483 Bn in net inflows at this point last year.

Substantial inflows during September can be attributed to the top 20 ETFs by net new assets, which collectively gathered $30.1 Bn.

ETFGI : Global ETFs and ETPs industry at the end of 2020

ETFGI report on ETFs and ETPs in Europe – February 2021

ETFGI : Assets in ETFs/ETPs listed globally reach a new record of US$8.30 trillion at the end of February