ETFGI reported that ETFs and ETPs listed Globally gathered net inflows of US$44.31 billion in February, bringing year-to-date net inflows to US$61.66 billion….

Assets invested in the Global ETF/ETP industry finished the month up 3.15%, from US$5.16 trillion at the end of January, to reach a record US$5.32 trillion, according to ETFGI’s February 2019 Global ETF and ETP industry landscape insights report. (All dollar values in USD unless otherwise noted.)

“Throughout February markets pushed higher, resulting in the best start to the year since 1996, with major US indices comfortably erasing any hangover felt from the Q4 ’18 market rout. US-China trade talks appeared to have made good progress while Brexit stalled even with the 29th march deadline looming. Central banks in the developed economies have maintained an accommodative stance to ease growth slowdown fears, with the US Federal Reserve reiterating their new ‘patient’ policy stance. The S&P 500 was up 3.21% by the end of February bringing year-to-date returns to 11.48%, similarly the S&P Europe 350 was up 3.45% for the month, with year-to-date returns of 9.89%. The Topix 150 finished February up 0.33%, with year-to-date returns of 7.62%. Emerging and frontier markets saw more modest gains, finishing February up 0.74% and 2.62%, bringing year-to-date returns to 8.56% and 7.35%, respectively.” according to Deborah Fuhr, managing partner and founder of ETFGI. 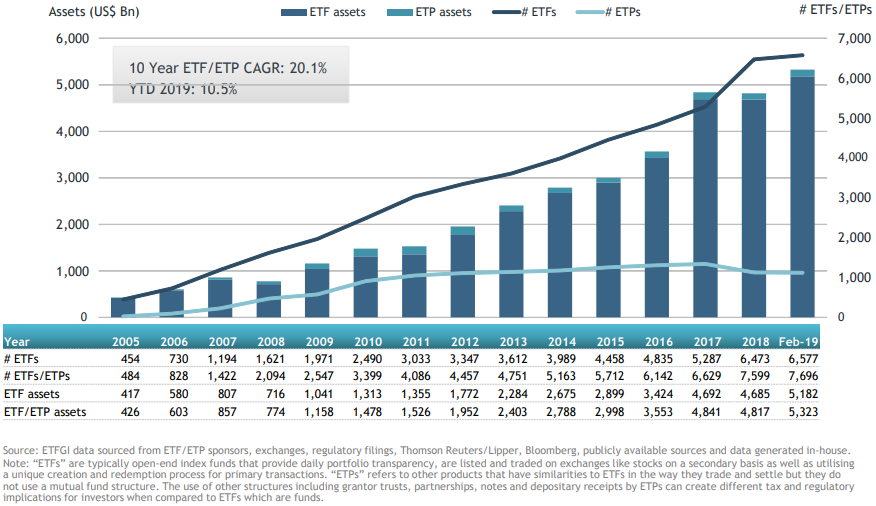 Equity ETFs/ETPs listed Globally attracted net inflows of $28.62 Bn in February, bringing net inflows for 2019 to $19.79 Bn, substantially less than the $90.95 Bn Mn in net inflows equity products had attracted by the end of February 2018.

Substantial inflows can be attributed to the top 20 ETF’s by net new assets, which collectively gathered $27.20 Bn in February, the SPDR S&P 500 ETF Trust (SPY US) gathered $3.09 Bn alone.

Investors have tended to invest in large cap equity/fixed income ETFs in February.

ETFGI : Global ETFs and ETPs industry at the end of 2020

ETFGI report on ETFs and ETPs in Europe – February 2021

ETFGI : Assets in ETFs/ETPs listed globally reach a new record of US$8.30 trillion at the end of February