Investors looking to invest in Exchange Traded Products (ETPs)—whether that is a fund or a note—may notice there are different currencies associated with the instrument…….

These currencies can have a significant impact on the return of the product, and therefore it’s important to understand how they work and why they fluctuate. This article seeks to offer some clarity to investors and traders around how currencies in ETPs work.

The key information to be aware of

This means that while ETPs are issued and redeemed in their base currency, they may be traded in multiple currencies and on different exchanges. Ultimately this facilitates trading and settlement by giving the investor the ability to buy the ETP efficiently through their own local exchange.

For example, a 3x short 10-year US Treasuries ETP has both its base currency and NAV in USD and trades in GBx and USD on the London Stock Exchange and EUR on the Borsa Italiana and Deutsche Börse Xetra.

The return of each ETP will be different depending on the base currency of the ETP. It has its base currency and NAV in USD but quotes in EUR on the Borsa Italiana. In the table below, we show a hypothetical example indicating the daily movement of the NAV (in USD) for this ETP and include the daily change of the EUR-USD exchange rate.

The EUR price of the ETP is affected by both the change in the ETP’s price in USD and the EUR-USD exchange rate.

Source: WisdomTree, illustrative example. Past performance is not indicative of future results.

This relatively simple example demonstrates that for an ETP where the underlying exposure has its NAV in a currency that differs from the listing currency, it is important to take note of both sets of returns.

Impact of currencies over time

The chart below shows the cumulative % change in NAV (USD) for the same ETP, alongside the EUR-USD spot rate and the NAV in EUR between December 2016 and September 2017. 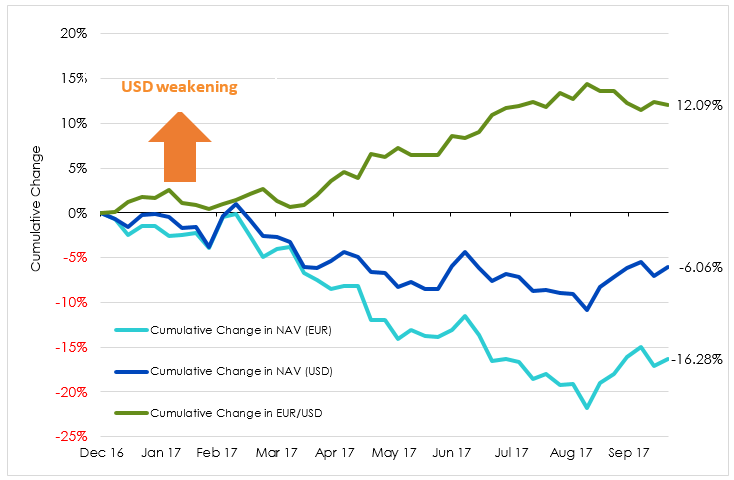 Source: WisdomTree, illustrative example. Past performance is not indicative of future results.

For this reason, if you invest in an ETP in a currency different to the currency of the index of such ETP, it is important that you are aware of the impact that movements in the exchange rate between such currencies can have on your investment.

Lyxor Climate ETFs have raised over €1 Billion in assets