Investors holding a 3x leveraged oil ETP would have gained over 15% in the first week of November—more than 3x the return of front-month oil futures over the same period. Underpinning this is an easing supply glut and a potential OPEC supply cut extension—both of which, we believe, reaffirm the structural bull case for oil……

By Viktor Nossek , Director of Research

In articulating its exit-plan from the QE programme in October, the ECB delivered a clear message: the eurozone economic recovery is self-sustaining and no longer in need of exceptionally loose stimulus. Deflationary risks are increasingly remote.

As a result, a precedent may have been set for the eurozone’s safe haven assets to come under pressure in the near future, in the same way that US Treasuries were affected during the Fed’s taper talk in 2013. Most at risk are German Bunds, as aside from having benefited disproportionately from the vast quantities of fixed-income securities purchased by the ECB, their yields remain well below inflation. For instance, it was as recently as October 2016, that the yield on 10Y Bunds broke out of negative territory. Investors mandated with targeting income in Europe’s high-grade bond market have been forced to take significant duration risk to do so.

Those investors that have allocated to long-dated high-grade debt in Europe in the search for yield look particularly vulnerable against a backdrop of inflationary pressures building from structurally-led demand forces underpinning the eurozone recovery. These emerging pressures on consumer prices look stickier and longer lasting than the short-lived supply shocks resulting from volatile euro and commodity price pass-through effects.

If now is the time to consider hedging the downside risks to eurozone long-dated fixed-income portfolios, then leveraged short ETPs tracking ultra-long German Bunds can serve as capital efficient hedging tools for investors seeking to protect their high grade, high-duration portfolios from these risks.

The capital required to set up a hedge can be approximated by beta, or the sensitivity of the leveraged short ETP to the long investment. With beta hedging, the following factors should be considered:

The higher the short ETP’s leverage factor, the higher its beta to the underlying index, and to the fixed-income portfolio benchmarked to it. For instance, if the underlying index (e.g. 10Y German Bunds) falls 0.5% in one day, a 3x short ETP and a 5x short ETP tracking the underlying index will rise 1.5% and 2.5% respectively. Higher leverage factors can increase the hedge instrument’s capital efficiency, since less initial capital is required to set up the hedge. Put simply, if an investment worth $100 is hedged using a 3x short ETP, the initial capital required to do so is 1/3rd of the investment, or $33.3. If using a 5x short ETP, the required initial amount would fall to 1/5th of the investment, or $20. This example ignores compounding and rebalancing.

The effect of daily compounding on the cumulative returns of leveraged short ETPs can, in the case of directional, trending markets, magnify their performance over time. Similarly, in directionless and volatile markets, performance can be eroded. The former implies that the beta of the leveraged short ETP to the fixed-income investment can be greater than the leverage factor, the latter implies that the beta can be less than the leverage factor. As a result, when leveraged short ETPs are used as hedge overlays on fixed-income investments, the hedged position can veer off the initial set up, or targeted hedged position, if held over a period of weeks or months. Hence, investors must monitor and rebalance their hedged position to prevent their investments from progressively becoming over-or under-hedged. Rebalancing the hedged position will not only control the hedge ratio, but will also work to maintain beta.

Leveraged short ETPs tracking fixed income are highly sensitive to small changes in interest rates. Using the concept of duration in estimating sensitivity, if interest rates rise by 20 bps, the value of a hypothetical portfolio benchmarked to a +10Y German Bund index with a duration of 15 may fall by approximately 3% (0.20% x 15)1, as shown by the red line in Chart 1. 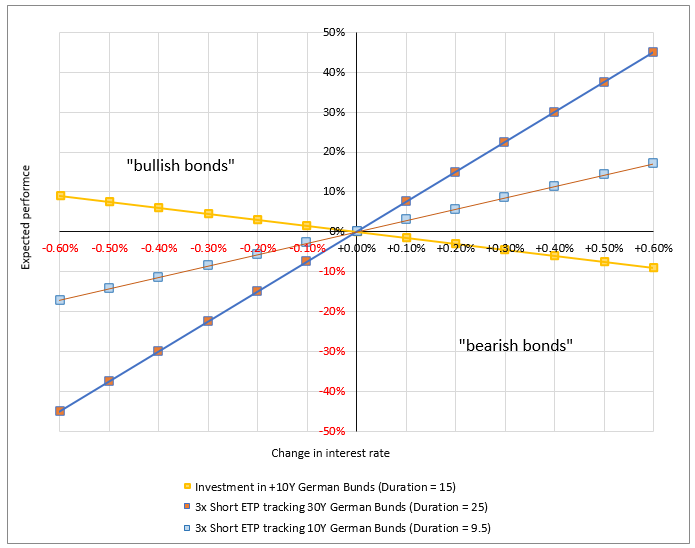 Source: WisdomTree. Expected performance is only indicative and may not reflect actual returns.

To showcase how leveraged short ETPs tracking ultra-long fixed-income benchmarks can extract greater capital efficiency through the process of beta hedging, we present the following example:

Based on daily observations of the four-week period returns between 1 January 2006 and 19 September 2017, we noticed the following (see Chart 2):

Source: WisdomTree, Bloomberg. Data from 1 January 2006 to19 September 2017. Based on backtested data. Past performance is not indicative of future returns

The difference in beta and the hedge’s capital efficiency is explained by the 30Y Bunds’ duration of 25 vs the 10Y Bunds’ duration of 9.5. With a duration of 15 for the +10Y Government bond portfolio benchmark, investors receive an additional 0.5 of beta on top of the leverage factor of 3x from the higher duration risk assumed by 3UBS’s 30Y Bund as the underlying exposure. In contrast, with 3BUS tracking 10Y Bunds, the duration is substantially lower than the portfolio’s benchmark, thus effectively eroding beta to less than what is implied by the leverage factor of 3x.

Macro fundamental factors impact bonds of varying maturities differently. Consider how, looking ahead to 2018, the ECB’s QE tapering, or speculation around the Fed’s policy tightening in the absence of high inflation may cause non-parallel yield curve shifts in the US and the eurozone. It will limit the extent to which investors can reliably ‘lever-up’ with duration to boost capital efficiency. These factors need to be considered when hedging interest rate risk and using leveraged short ETPs as hedging instruments.

As shown in Chart 2, the higher goodness of linear fit for 3UBS suggests that for portfolios benchmarked to +10Y Bunds, the 30Y Bund is more reliable than the 10Y Bund as an inverse proxy to the benchmark. That’s not to say that for shorter-dated bond investments (e.g. maturities of 7-10 years), 3BUS may, despite a lower beta than 3UBS, end up being a more robust hedging instrument.

Rebalancing the portfolio when the hedge ratio drifts too far off target may improve the hedged portfolio’s performance, especially in abnormal or extreme bond market conditions. Investors should be cautious of extreme bond valuations in such conditions. Last year’s negative to near-zero yield period for Bunds triggered a sharp sell-off, with low coupon yields and elevated prices adding to the Bund’s convexity. This underscores the upside performance potential of leveraged short ETPs and their effectiveness as tactical hedging tools.

VanEck : Emerging Markets remain the biggest opportunity for investors in 2018